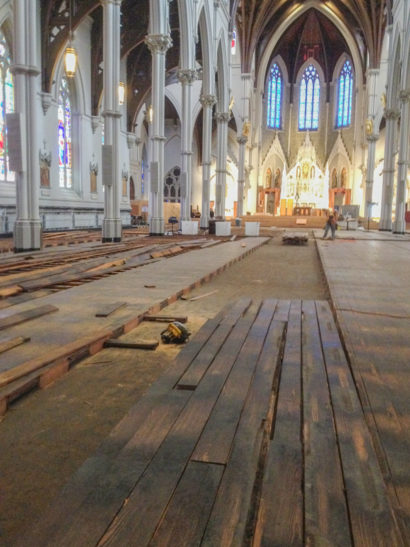 For more than 142 years, the Cathedral of the Holy Cross in Boston’s South End has stood grandly and served its parishioners. Now, after decades of graceful aging, the building is undergoing a crucial renovation. As a part of the project, Longleaf Lumber was able to salvage thousands of feet of gorgeous heart pine flooring.

When Boston’s Catholic population exploded in the mid-1800s, the sole Catholic church on Franklin Street was overwhelmed. To accommodate the newly-arrived churchgoers, architect Patrick C. Keely was commissioned to draw up plans for a new cathedral. Born in Ireland, Keely emigrated to the United States in 1842, beginning his career as a carpenter in Brooklyn, New York. Over the course of his career, Keely designed 16 cathedrals and close to 600 other churches.

Although Keely’s first site visit at Washington Street in Boston was in 1861, the United States Civil War put a temporary halt on construction plans, and ground wasn’t broken until 1866. Nine years later, in 1875, the cathedral was dedicated.

Designed in the Gothic Revival style, the Cathedral was made primarily from Roxbury Conglomerate (informally known as Roxbury puddingstone), the official rock of Massachusetts and bedrock stone underneath twelve Boston-area cities. The cathedral was trimmed with Quincy granite and sandstone. Keely also designed the altar and the case for the Hook & Hastings organ, which – at the time – was the largest of its kind in the United States. 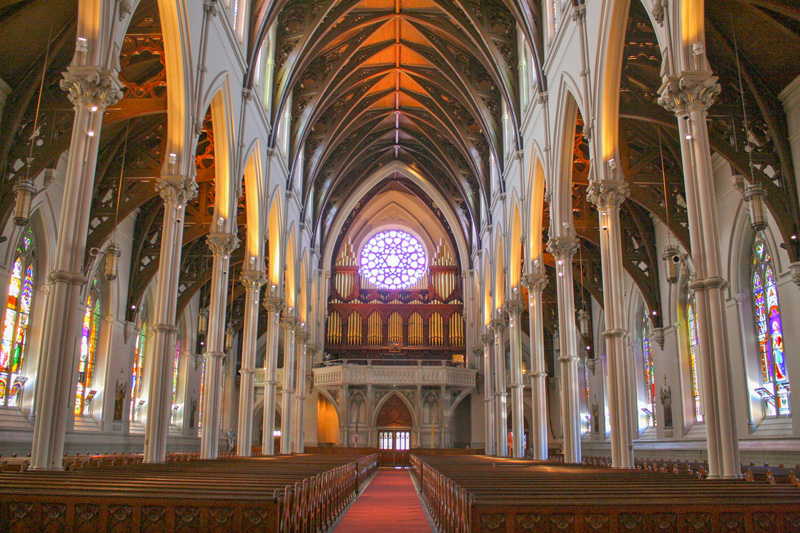 Today, the Cathedral of the Holy Cross is the mother church for the Roman Catholic Archdiocese of Boston and is the largest Roman Catholic church in New England. The building is 364 feet long by 170 feet wide at the transepts (90 feet at the nave and aisles), by 120 feet high to the ridgepole.

In additional to being an important location for religious services, it is also home to a children’s camp, meeting space for Alcoholics Anonymous, an emergency shelter, a food panty, an immunization center, and other social services. Historic events that took place at the cathedral include a Requiem for John F. Kennedy in 1964, a prayer service by Pope John Paul II in 1979, and an interfaith prayer vigil for Boston Marathon bombing victims, with a eulogy delivered by President Barack Obama in 2013. 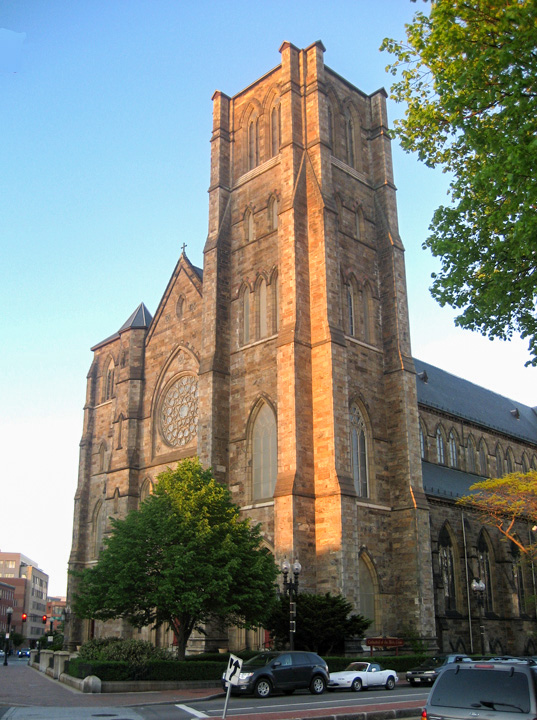 Due to its age and deterioration of some materials, the cathedral is now being renovated. Suffolk Construction is handling the $25 million reconstruction, and has committed to doing so without profit. The extensive improvements to the cathedral include a new floor and altar as well as new sprinkler, lighting, and sound systems. The leaking roof and water-damaged walls will be repaired, and air conditioning installed. Pews for over 2,000 people have been removed and will be refinished and reinstalled. Beams are to be varnished, columns painted, and the extensive collection of stained glass illuminated.

Longleaf Lumber became a part of the renovation process when the existing flooring was scheduled to be removed. After assessing the floors in place, it was determined that careful and skilled dismantling of the existing floor structure would allow the antique boards to be saved. As the flooring was removed from beneath the pews, we discovered a striking wear pattern of both bright and dark patches.

By the end of this process, we had been able to salvage 8,000 square feet of exceptional quality Heart Pine flooring that is entirely free of knots and in widths from 4″ to 5-1/2″. The flooring is 1-1/8″ thick (which is thicker than traditional residential flooring) and, because most of the existing tongue-and-groove profiles are still useable, could be reinstalled ‘as-is’ to great visual effect. The floorboards could also, however, be re-milled to 3/4″ thickness with a new tongue and groove, milling away the current top wear layer for a fresh, consistent surface. In either case, a beautiful floor with a very special history is now available. We look forward to seeing where this flooring finds its next home. 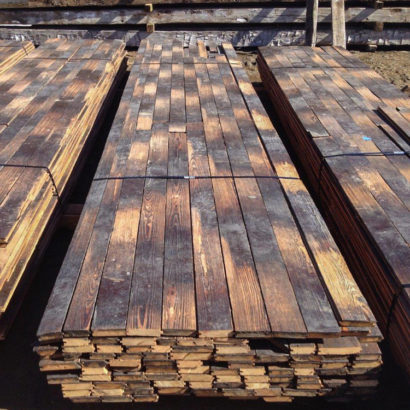