First built out in 1807, Andover’s Abbot Mill site was originally a woolen mill operated by brothers Abel and Pasehel Abbot. Since then, the site and buildings have played host to a number of manufacturing and industrial uses.

The Abbot Mill barn is one of our few salvage structures to yield reclaimed wood with a predetermined destination. Restaurateurs, planning to demolish the dilapidated barn-like structure to make space for their nearby eatery, were looking to save materials from the building for reuse in their new space. When we got the call, the demolition date was days away. Never ones to shy away from a challenge, Longleaf rushed to Andover and salvaged flooring, decking, and joists before the mill was destroyed.

Situated at a downright bucolic bend in the Shawsheen River, the Abbot Mill barn was a 3.5 story structure featuring two working floors and 1.5 floors of loft space. Its road access was at 18-20 Red Spring Road in Andover’s Village Industrial District, a U.S. Historic District on the National Register. Built entirely from domestic softwoods, the mill’s timberframe, joists, decking, and floorboards were all salvageable materials. 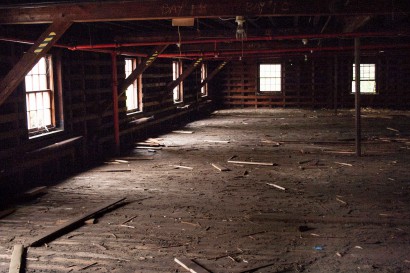 The mill’s storied history began in 1807, when Abraham Marland operated a cotton mill across the river from the site. After construction and use by the Abbot brothers for spinning cotton and woolen yarns, the mill passed to a number of other tenants. From the 1840s until 2013, these structures were occupied by a number of industrial tenants, including the Smith & Dove Manufacturing Company and, after a 1947 purchase of the property, the Redman Card Company.

The Abbot Mill barn was likely constructed sometime in the late 19th century. The timberframed building was constructed with sawn (not hewn) beams and braces, as well as a relatively large amount of single-pane windows and extensive loft storage space. Records indicate the building was used as a drying shed, raw flax storage, and cork storage.

A basement fire in the spring of 2013 spread throughout the building, damaging the wooden structure before it could be contained. The salvage process uncovered a number of fire-damaged floorboards and joists. The damage appeared most acute in the southwest corner of the third story, where much of the sheathing and roofing was charred. 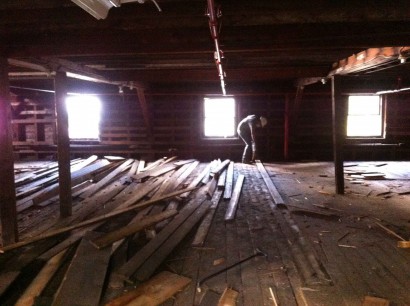 The salvage process began with the eastern white pine floorboards, which Longleaf will re-mill into paneling for the new restaurant tenants. Originally hand-nailed with cut nails, the floorboards were difficult to raise, as salvage workers needed to take care not to crack or shatter the boards. Despite our best efforts, the brittle boards proved challenging to reclaim – much of it cracked or split during the process. After being carefully removed from the building, all of the flooring was de-nailed on site – much of it by hand with hammer/crowbar.

The next material to be salvaged and de-nailed was the Northern Hard Pine and spruce decking of the first floor and third floor landing. Measuring in at a rough 6/4″-7/4″ thickness, some of the decking was splined, and some square-edged. Tacked to the floor joists with impressive cut nail spikes, the boards came up easily and quickly. Much of the material was badly damaged from years of use (and some spray-painted orange), but a majority of the material can be re-milled to preserve the incredible footworn patina.

The last pieces to leave the site were spruce floor joists, many of which were badly charred by the 2013 fire. Dropped from the ceiling with sawzall and prybar, the timbers were then de-nailed on site and shipped to our mill in Berwick, Maine, where they will be recycled into tabletops, bartops, and sawn lumber. The skeletal remains of the Abbot Mill were a testament to its simple and efficient construction; it was built to work and built to last. We’re sad to see the building go, but glad to know that pieces of its history will live on in future uses. 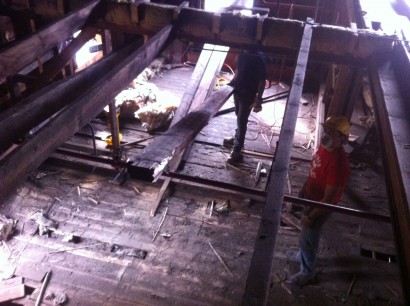 Our Photos of the salvage Process 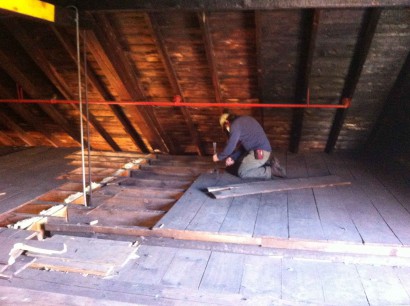 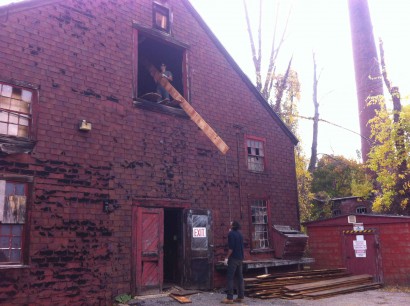 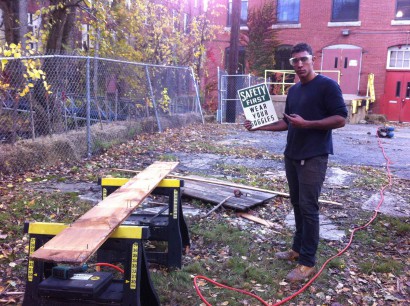 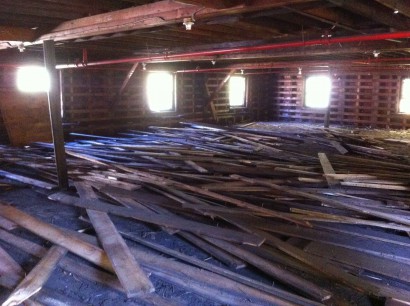 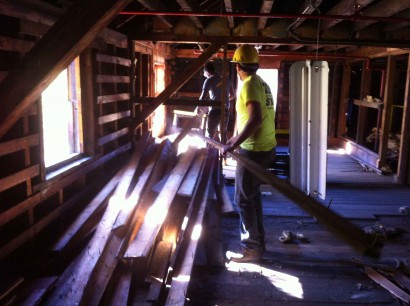 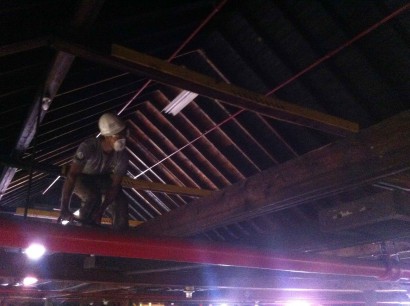 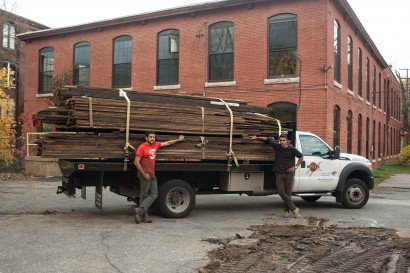